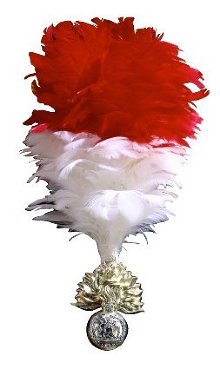 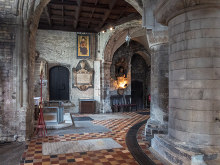 London, Interior, St Bartholomew The Great, © Christine Matthews
Enter your advert below to feature in
Click to check coverage & costs
Covid Virus Update
Cases in the Fusiliers In London and Throughout History area

Want to advertise on this website? Create your advert now.

The Centenary of the start of WW1 is in two years time. The Fusiliers will, in addition to other activities, be remembering the part played by 4th Bn Royal Fusiliers at Mons in August 1914. The Bn won the first two Victoria Crosses of the War. They were awarded to Lt Maurice Dease VC (posthumously) and Pte Frank Godley VC who was taken prisoner and lived into his eighties.

The plaque on the bridge at Nimy , where the battalion held the overwhelming German forces at bay allowing the BEF to withdraw, will be rededicated. A visit will be made to the St Symphorien Cemetery where many of the battalion are buried. The action at Nimy was on 23 August but as the new museum in Mons will be opened on that day in 2014 the Fusilier attendance at Mons/ Nimy will be on 5th September 2014. The British and Belgian Royal Families have been invited to the museum opening.

As further plans for the Centenary are developed details will be posted here.

A number of pilgrimages are planned each year by the Association. These are open to all who are interested. Wives and family friends are welcome and we still get those who, although in their eighties, took part in the battles and campaigns of the Second World War and are able to tell us of their experiences. It may be that readers of this website are not associated with the Fusiliers but had an ancestor who took part in the many battles in which the Fusiliers were engaged. They too are welcome on the tours.

Previous pilgrimages have included Albuhera in Spain where the Fusiliers were engaged in one of their most illustrious battles and Mons in Belgium. 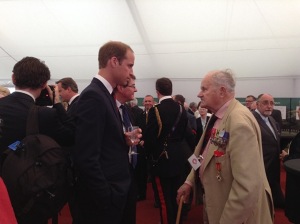 On the 4th of August the Government launched the Centenary of The First World War. This took place in the Cemetery of St Symphorien near Mons. As the nephew of Lt Maurice Dease VC of the 4th Bn Royal Fusiliers  I, along with my son Patrick, was invited to attend as were others whose ancestors are buried in that tranquil and restful cemetery. It is unlike all other CWWG Commission cemeteries, not only in the way the graves are gathered in small plots, but because both German and British soldiers are buried there. I was  particularly pleased to meet the man whose family had given the land to create the cemetery just after the war.

Amongst the many Heads of State present were the Duke and Duchess of Cambridge and Prince Harry who were representing the Queen. We gave Prince William the programme for the Fusilier day which was scheduled for the 5th of September. He was very interested to hear about Maurice Dease when we explained he was the first VC of the war. The Prime Minister and the Archbishop of Canterbury were amongst others  we met and we were sorry we could not introduce the two Fusilier  Chelsea Pensioners ,Bert Mayle and Gerry Farmer,  who we  had seen earlier in the day. When I  met the Irish President and showed him my uncle’s diary started on mobilisation he wanted to know why it was mainly about buying horses on the Isle of Wight . I explained that my uncle, as an Irishman, was the Bn Equitation Officer as well as commanding the Machine Gun Platoon and some forty horses were needed by the battalion.

Many who read this will have seen the events of the evening on TV. Dan Snow introduced the various items which included music and  readings from letters and diaries written by both British and German soldiers. One particularly moving letter written by a Private in the Dublin Fusiliers was read  by Prince Harry. The reading by Fusilier Charles Woolacombe of Fusilier Holbrook’s diary got a great reception. Holbrook was the CO of 4 RFs batman and featured as the runner in the film “Our World War” shown on BBC3  and  BBC1. There were some 40 Fusiliers from 1RRF  as extras in the film which  I had  been assisting the BBC with the film for many months.    The  large screen showed pre recorded music by the London Symphony Orchestra.  The evening finished with  floral Tributes,The Last Post and a blessing by the Archbishop of Canterbury.

On 5th September a party of some one hundred including 30 Fusiliers, 22 members of the Dease family,10 buglers from the Regimental Association, 12 METPOL in  fusilier 1914 uniform, the British Ambassador, the   Mayor (Locum Tenens) of Mons all   headed up by The Colonel of the Regiment were at Mons to remember the heroism of the 4th Bn on 23rd of August 1914.

The planning had started three years earlier as we were concerned that so many other Regiments who had fought at Mons  would be doing the same. The Dream hotel in Mons was booked before it was built! Likewise 60 seats were booked on Euro Star and a coach for the three days we were there was kindly provided by the Charles Skey foundation.

The  first event was a visit to the museum at Nimy where we were joined by the descendants  of the La Grelle family whose grandmother  in 1914 had , as a child, fled from Belgium and found sanctuary with my wife’s family in Lincolnshire. The families, now with the fourth generation,are still great friends.                                                       We heard from the Curator who showed us  a painting by a local artist, of Dease on the bridge.. We had a chance to mingle,and they laid on an excellent reception to keep us going for the rest of the day. We then walked down to the bridge where the Fusiliers had put up a magnificent defence against overwhelming odds and where Dease and Godley had won the first VCs of the war. The Colonel was received with a General Salute  by the buglers and the METPOL Guard of Honour. Maurice French then introduced him to the line up of VIPs. First the Mayor & her husband then the British Ambassador, the Defence Attache, the wife of the Irish Ambassador, the Chaplain, M Vasco of Mons, Representatives of H4H &SSAFA, Arthur French –nephew of Lt Dease-, Sgt Williams commanding the METPOL, JUO Kate Bell of Dease Pl Stonyhurst CCF and finally one year old Lily French-Rodriguez  the Gt Gt niece of Maurice Dease wearing the socks he had worn 125 years ago.

The Chaplain then dedicated the new memorial plaque to Dease & Godley. The original, erected in 1939, had been stolen for the value of its bronze in 2010.After “Abide with Me”  and “They shall not grow old” the Colonel   laid the wreath on behalf of  the Regiment. Then  two of the Gt Gt nephews of Lt Dease-Raffi & Max French-laid a wreath on behalf of the family. Further wreaths were laid by the Mayor, the Ambassadors, and  the City of Mons.

We  then moved some fifteen miles to the St Symphorien cemetery where the Chaplain led us all in prayers of Remembrance and the singing of “O Valliant Hearts”followed by the Regimental Collect and the National Anthems of Belgium and Great Britain . Wreaths were then laid by the Colonel and others. The Dease wreath was laid by Zain & Zamir Ullah the Gt Gt nephews of Lt Dease. Small poppy sprays were then laid on the graves of  the following Fusiliers--- Button,Clarke, Cornborough,DeaseVC, Forster, Johnson,Kent, Mead, Oxenbury,Smith. A further wreath was laid at the small memorial to the 13 Fusiliers whose names were not known, A final wreath was laid at the Anglo German memorial built by the Germans.

The party then returned to the Town Hall in Mons where the Mayor spoke about the close bonds between the Regiment and the town over the past 100 years. The Colonel then replied stressing  how much Mons means to the current, serving Regiment and the example that they strive to live up to.

The Mayoral book was then signed by the Mayor, the  Colonel, Brigadier Aldridge, Major French and the Head of Operations H4H. The Metpol then set off on the 140 mile march following the withdrawl route of 4 RF. This was to raise funds for H4H, They  collected 600 Euros mainly at the Nimy bridge. They completed the march in six days. There were some  blisters but considering their average age was 38 it was a fine achievement.

Next day we returned to London  with the help of Colonel Ian Kippen who had made sure that the coach arrived , albeit 400 yards from the hotel due to road works, in time for us to catch the Euro Star train. Both Ian and Brigadier Bill Aldridge and C/Sgt Brown, the three Fusiliers at SHAPE, had been a great help not only on the day but for the past year helping with the planning.We also  owe a great debt of gratitude to Michel Vasco of Mons  who has been such a help.

I had been present at the 50th and 75th Anniversaries of the Battle of Mons. I am confident that the Regiment and the Dease family will be well represented again in 2039 to remember all that the Royal Fusiliers achieved on 23rd of August 1914. We will remember them.

The South East Kent Branch of the Regimental Association was formed in 2000. The Branch currently holds its meetings and social events at the Grand Hotel The Leas Folkestone on St Georges Day and our Annual Dinner in October. 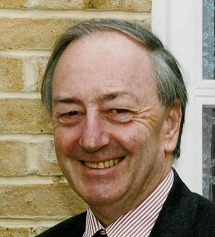 Our association brings together veterans from the Second World War, Korean War, many interesting postings in the Middle East and around the world. Regular area meetings are held at HM Tower of London. The branch actively participates in pilgrimages and battlefield tours. 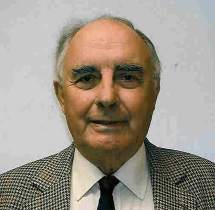 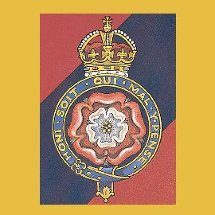 The Association exists to foster the esprit de corps and traditions of the regiment among all ranks past and present and to maintain the comradeship formed during their service.

Please see below for branches of The Association.